After John Pike’s father died, he turned to food to deal with his depression. By the time he was 16, the teen from Irvington, N.Y., had reached 280 lbs. 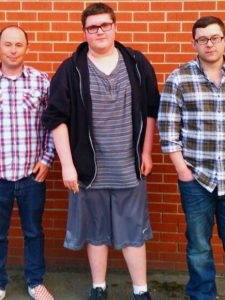 “Physically, I was always drained of energy,” Pike, now 17, tells PEOPLE. “I would sleep most of the day. Emotionally, my depression grew. I moved to a new school and although it wasn’t overt, I wasn’t welcomed, and I became socially anxious as well.”

His weight also affected his health – Pike became pre-diabetic and developed liver problems. At the urging of his mother and aunt, the teen began meeting with personal trainer Sam Langer.

“He wasn’t very motivated at first,” says Langer, who is a franchisee of GYMGUYZ, an in-home personal training company. “We tried to make the workouts as fun as possible, whether we were boxing, whether we were running outside, we went for bike rides, we went for walks – anything to get him started.”

One night, Pike had an epiphany, and he realized he needed to lose weight to get his health back on track.

“I started to think about my overall health and what would happen if my mom lost me,” he says. “She already lost my dad. I just decided I have to take care of myself.”

Pike began to approach his workout sessions with Langer with a new vigor, and he also stuck to a healthy meal plan.

“Ever since that night he was focused, he was motivated, and the weight just started melting off his body,” says Langer. “He would be down 12, 15, 18 lbs. in a week. I’ve been doing this for a long time and I’ve never seen anything like it. It’s unbelievable.”

Throughout the year and a half Pike has been working with Langer, he has lost 120 lbs., and now weighs 160 lbs.

“The weight’s been off for the past four or five months, so we’ve changed the workouts from weight loss workouts to strength building workouts,” says Langer. “But we’re still doing hour-long workouts, and I’m still making him sweat!”

In addition to the physical changes, Pike has gone through an inner transformation a well.

“Overall I feel more energetic,” he says. ” I graduated high school, and I like going out with my friends and meeting new people. I gained my confidence back, and I’m happy now.” 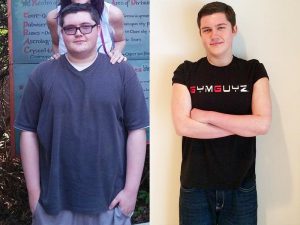