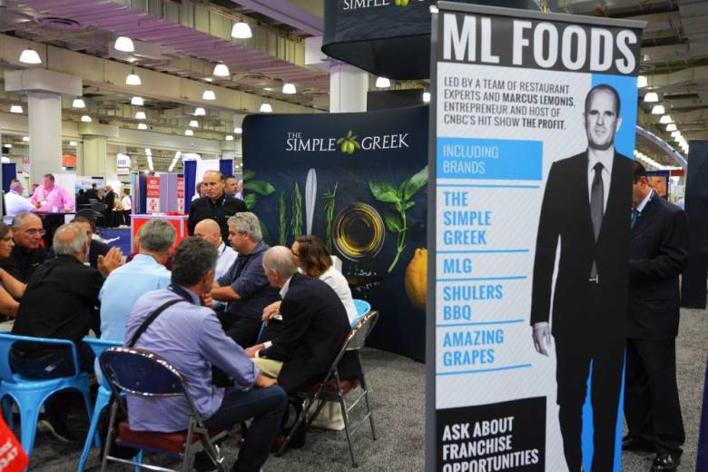 The annual franchise show at the Javits Convention Center in Manhattan this week is where entrepreneurs come to look for the next big thing. Last year, it was novel pizza concepts like pizza in a cone. This year, a lot of people are betting it will be elder care, child care or pet care.

While food franchises still are the largest single category at the International Franchise Expo, companies that sell a service — whether it is home health care, business coaching, or sessions with a personal trainer — represent the fastest-growing trend.

“Service businesses are pretty hot at the show this year,” said Tom Portesy, president of MFV Expositions, the Paramus-based company that hosts the show, as well as international franchising gatherings around the world.

Portesy said he’s seen a significant increase in the number of companies offering home care for seniors, day care and pet care. Those businesses might not have been viewed as typical franchise opportunities in the past, Portesy said, but the franchising model has spread in recent years to nearly every type of business.

Service companies that fix dropped cellphones, repair damaged leather or wood furniture, or help people prepare a meal to cook at home, also were seeking investors at the show.

The Javits show opened Thursday and runs through Saturday. It is expected to draw 20,000 attendees over the three days, including attendees from 120 countries. About 450 companies seeking new franchisees, or that are looking to sell services such as printing or legal advice to franchise owners, are exhibiting at the event.

Hackensack-based Executive Home Care was one of 10 companies at the show looking to expand by franchising its business plan for elder care. Chief Executive Lenny Verkhoglaz founded the company with his wife, Mila, in 2004 after being asked to help a bedridden member of their Park Ridge synagogue.

The company, named a 2016 top new franchise by Entrepreneur magazine, now has about 300 clients in North Jersey and began franchising in 2013 to expand. It has about 30 franchise operators in six states and is exhibiting at the franchise show for the first time this year.

The need for caregivers for the elderly who want to remain in their homes is growing, Verkhoglaz said.

“It’s very difficult for the children to be the caregiver to the parent. You want to remain a child not a caregiver,” he said.

New Jersey is a prime target for many of the companies exhibiting at the show, who are eager to expand their presence in the state.

The Simple Greek fast-casual restaurant chain, a new food concept backed by reality TV business guru Marcus Lemonis, was advertising that it is coming soon to Paramus at its large booth at the show. Company officials said the Paramus franchisee is looking for a location and that they hope to eventually have multiple sites in North Jersey.

Paul Lyons, president of the Beef Jerky Outlet chain, said the success of its one location in Atlantic City, at the Tanger Outlets, had persuaded the company to seek more locations in the Garden State. The company is targeting outlet malls in New Jersey.

Several companies at this year’s show were offering franchisees a lower-cost way to go into business, with mobile versions of their typical stores. Richmond, Va.-based SweetFrog frozen yogurt was exhibiting a mobile trailer version of its self-serve yogurt stores that can be towed to carnivals and outdoor venues.

“We created the trailer because food trucks are such a huge presence these days,” said Casey Cooley, manager of Franchise Development for SweetFrog. “It also makes it less expensive for the franchisee. They don’t have to pay rent, and they’re not locked into a single location.”

Philadelphia-based Rita’s Ice is rolling out mobile carts as a way for franchisees to develop locations in sports arenas and other venues.

Long Island-based fitness company Gymguyz delivers personal trainers and exercise equipment to homes and offices in mobile vans. The company has 70 franchisees in 18 states, including one in Bergen County that serves customers in Fort Lee and surrounding towns.

Gymguyz founder Josh York said he founded the company in 2008 after one of his personal training clients at a gym said to him, “I wish you could come to my house, but I don’t have any [of] the equipment.”