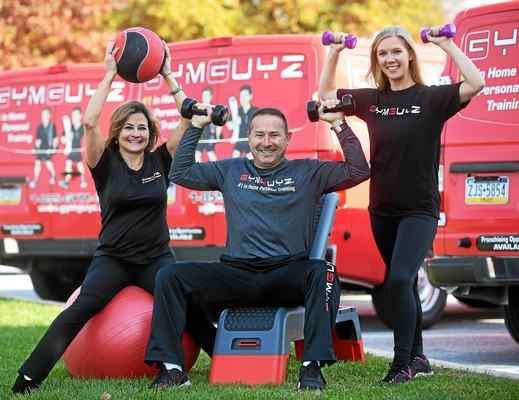 Don’t be surprised if you see a blur of red as you traverse the roads in the Philadelphia region.

A trio of entrepreneurs is joining a group that’s establishing itself in the region to bring fitness to the masses in a new way.

Called GYMGUYZ, the Plainview, N.Y., company recently signed up three franchises to cover much of the western Philadelphia suburbs.

“We went from zero to 15 in Philly in three months, it’s a good market for us,” said Josh York, founder and CEO, of the region.

Franchise owners pack 365 pieces of equipment – one for each day of the year, York jokes – into their bright red vans and go to homes, schools, workplaces, parks – wherever – to provide one-hour workouts. The vans contain weights, resistance equipment, body bars, balance balls and much more. GYMGUYZ develops personalized exercise and nutrition programs that are designed for their clients.

“It’s a great model,” York said. “There’s no brick and mortar and the scalability is very high. We get to change people’s lives everyday. It’s the most amazing feeling in the world.”

York’s enthusiasm was evident in the newest area franchisees during a recent visit to the West Goshen Community Park.

There, Kristina Conway, Mark “Spark” Vandzura, and Stacie Johns-Fink demonstrated their wares and discussed what they see as the future of the American workout.

“We just opened a few weeks ago,” said Johns-Fink, whose franchise territory covers the West Chester, Exton and Downingtown areas. “I always, always, always had a passion for fitness.” The West Chester resident taught in health clubs in northern New Jersey and New York City, where she provided corporate fitness classes for NBC employees, before relocating.

She had worked for a business that trains mothers who just gave birth.

“I needed more,” she said.” For someone with a franchise, there’s 24-hour-a-day support

Conway’s territory includes King of Prussia, Phoenixville, Chester Springs and parts of the Main Line. She was a nutritionist and worked in nutrition education for a nonprofit in Pottstown before starting her GYMGUYZ franchise.

“We’ve been building a client base and letting them know there’s another option out there,” said Conway, 27, of Phoenixville. “I’m a true believer in trying to live a balanced life and I want to spread that around. I believe in it.”

Vandzura, 50, of Doylestown, is a Navy veteran who designed weapons systems. His franchise covers the lower half of Bucks County, including Doylestown, New Hope and Southampton. He said he spent $90,000 to start his franchise because of the concept.

“I love the family atmosphere, we’re all here to help each other,” Vandzura said of his fellow franchise owners. “I was looking for an opportunity to help people change their lives.”

York said it was during his high school days of playing hockey that he developed the passion for fitness. In 2007, after graduating from college, York began working for a marketing firm and continued working as a personal trainer in the evenings. It was during those evenings at the gym when the light bulb went on in his head. He noticed that gym members were inconsistent. They had too many excuses not to show up, he said, and thus his mobile training business was born.

The concept seems to be growing in popularity, York said. Last year, he had 20 franchises in three states. Now, he has 100 in 18 states. Next year, he plans to open 120 to 150 more. He’s also planning to take the business to Canada and the United Kingdom.