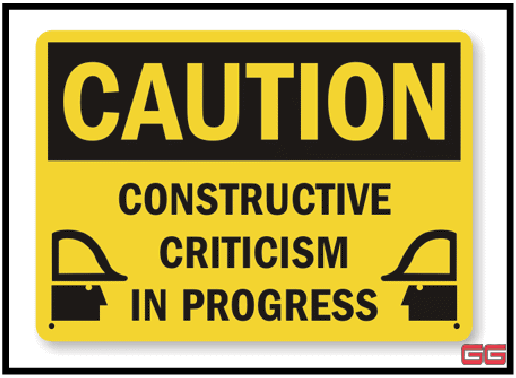 As a boss, you know that you’ve come a long way and probably encountered a lot of opinions along the way. Even on your journey, you’ve probably criticized your manager or boss, you may have even said it to their face. However, one thing you might have realized that if you harness criticism in the correct way, it will make you a better boss and co-worker. Here are five ways to train yourself to accept criticism and be better for it.

1.It’s natural to get defensive. Your guard goes up when someone disagrees with you, that’s common knowledge. However, if you understand that the “flight or fight” response is only natural, you can better handle your response (or outburst).

2.Mentally and emotionally train yourself. You will come across adversity, because that’s just life. But if you prepare yourself and your response, you can walk into any situation with an appropriate and well thought out rebuttal.

3.Think before you react. When faced with criticism, emotions flow first. Before reacting, take a moment to digest the information.

4.Reiterate the criticism. Sometimes, we think we hear things versus those things actually being said. Repeat back the criticism to the person who said it to you, not only would this tactic allow time to diffuse the situation, it may also clarify it as well.

5.Detach yourself from the project or assignment. Remember, that most times, when you receive criticism it’s usually only tied to a specific project or task, not to you as an individual.

It’s in our DNA to react, but great bosses and managers think before doing so. But as you’ve probably learned by now, it’s not enough to get ahead in life and ride the wave; you must adapt and roll with the changes, which might be adversity. Train your brain, emotions and most importantly your reactions and you’ll be better for it.