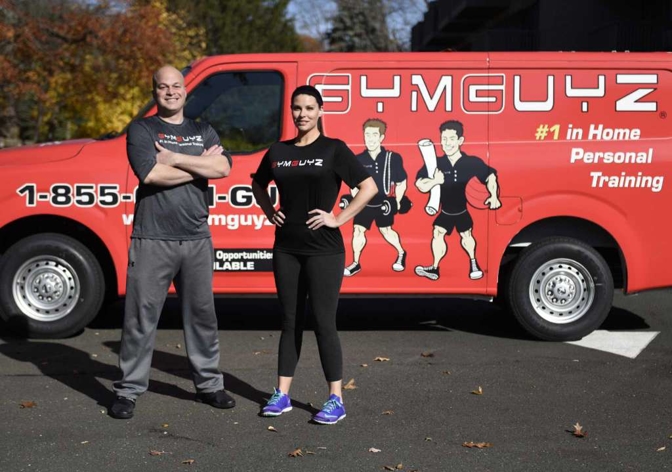 For 16 years and through two tours in Iraq, Dave Dequeljoe flew with a wingman as a Navy fighter pilot. He saw the importance of having a partner in accomplishing their mission.

Now he wants to provide a wing man for people in reaching their fitness goals. Greenwich’s newest gym, GYMGUYZ, aims to eliminate any excuses not to work out.

While many gyms entice people to visit them, GYMGUYZ trainers instead show up at the customer’s doorstep. GYMGUYZ has opened 86 franchises in two years, one of which is now based in Greenwich and owned by Dequeljoe and Amber Alagich.

Dequeljoe ended his Navy career with injuries that prevented him from maintaining the peak fitness he’d achieved while flying fighter planes. The realization that he was happiest when working out and playing sports combined with a desire for entrepreneurship prompted him to enter the health industry.

He found success in running a top franchise for a large massage company. There he met Alagich, who was also deeply rooted in health and wellness.

“Some of my earliest memories are of being in the gym,” Alagich said. She described growing up reading nutrition information and being involved in a gamut of sports and dance classes.